Many Bibliomation libraries are adjusting their services at this time. Please contact your local library staff or consult their website for more information about the services they are providing.
HomeLibrary Web Site Best Sellers & Award Winners Nutmeg Awards & Nominees Charter Oak Children's Book Award Kids Catalog Get a Library CardBack to Wowbrary

Because of Winn-Dixie / Kate DiCamillo. 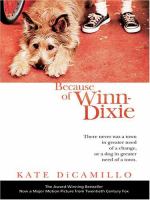 To see other titles in our catalog that have won the Intermediate Nutmeg Award, click here.

View other formats and editions

View all formats and editions (13)

Because of Winn-Dixie
by Dicamillo, Kate
Rate this title:
vote data
Click an element below to view details:

Kate DiCamillo was born in Philadelphia, Pennsylvania on March 25, 1964. She received an English degree from the University of Florida. At the age of thirty, she moved to Minneapolis, Minnesota and worked for a book warehouse on the children's floor. After working there for four and a half years, she fell in love with children's books and began writing. DiCamillo wrote the 2001 Newbery-honor book, Because of Winn-Dixie, which was adapted into a film in 2005. In 2004, she won the Newbery Medal for The Tale of Despereaux, which was also adapted into a movie in 2008, and for Flora and Ulysses in 2013. Her other works include the Mercy Watson series, The Miraculous Journey of Edward Tulane, and The Magician's Elephant. She was named the National Ambassador for Young People's Literature by the Library of Congress for the term 2014-2015. Kate's title, Raymie Nightingale, mde the New York Times bestseller list in 2016.